I remember laying on the OR table thinking I wouldn’t tell anyone it turned out this way. “I’ll just pretend this didn’t happen.” I thought to myself.

I hadn’t come to terms with the fact that, despite my best efforts, my first son was born via C-section.

My story actually starts about 2 years before he was conceived. Whether you call it a biological clock or baby fever, my brain kicked into hyper-awareness that I was capable of creating life. I started to clean up my diet and lifestyle and began preparing my body for carrying a baby and birth.

The Birth! I was the most excited about this part. I felt a deep spiritual connection to the ability to give birth. I didn’t realize how deep that connection would influence my emotions but in retrospect, I can see it pretty clearly now. I devoured natural birth documentaries, birth story videos and read birth stories online. Ina May’s Guide to Childbirth, Spiritual Midwifery and The Nourishing Traditions Book of Baby and Child Care were all books I read so many times I nearly wore holes into the pages.

In my mind, I saw a quiet birth at home. Laboring in a bath by candlelight with my husband being there for encouragement and surrounded by a strong team of midwives who would guide us on the journey.

It didn’t exactly turn out how I envisioned it but I want to be clear that it is no less dear to me.

Shortly after finding out that I was pregnent I learned that a homebirth would be difficult. Because of the state that we lived in at the time, it made it nearly impossible for a midwife to assist in home birth. At the time, I felt that my only option was a natural hospital birth.

I was terrified that I wouldn’t have the support and freedom during labor that I wanted. I was hopeful after finding a group of midwives who delivered at the nearest baby-friendly hospital. Things were looking good for our birth.

Then, at 32 weeks I was told that my baby was transverse-breech.

The night before my 32-week midwife appointment I was laying in the bath when I felt him turn sideways. I could actually feel his head and his bum on either side of my belly. The midwife confirmed it the next day and gave me Spinning Babies exercises to do along with a list of suggestions I could try.

I tried it all: chiropractic adjustments, acupressure, acupuncture, essential oils, and muxa buxom.

At our last birthing class, our instructor looked at me and told me that I should begin to plan for a gentle C-section–just in case. I knew she was right. I revised my birth plan and prepared myself that this may include surgery. I cried so many times over the realization that I wouldn’t have the birth that I had dreamed of. I prayed, I begged, and I did headstands to try to turn that baby.

At 37 weeks I went into labor.

That afternoon I went to my chiropractor for the third adjustment that week. As soon as I walked into the office, I went to the restroom to find that I had lost my mucus plug. Just in case, I sent my husband a text to come home as soon as possible, but I didn’t tell him why. I had just left the chiropractor’s office when I had the overwhelming urge to stop and buy another giant pack of toilet paper. It was the night before a huge blizzard was going to hit the DC Metro area and the grocery stores were packed. I began having strong contractions in the grocery store. It must have been noticeable because a cashier took pity and opened up a new checkout line just for me.

As soon as I got home, I called my midwife who confirmed that I may be going into labor. She told me to call her back if I had my bloody show and if so, not to delay coming into the hospital. The roads were already getting bad and I had a breech baby. Shortly after hanging up the phone, Charles walked through the door. I explained that we might be having a baby earlier than expected and that we need to make sure that the dog is walked and our bags were packed. I wanted to take a shower, but I wanted to take a bath to relax as well. As Charles walked the dog, I quickly showered to washed my hair, then I ran a hot bath with lavender oils, lit a few candles and got ready to relax. I was determined to have a small piece of the birth I had envisioned. But, fate had a different plan and just before I stepped into the bath, I noticed bright red blood.

So I pulled the plug and watched my ritual bath go down the drain. I dressed as Charles packed a few more things to take to the hospital. I said a long goodbye to the dog, since it would be the last time that she would be my only baby. As we walked out the door, I snatched the Goddess aromatherapy necklace I had made earlier that day and placed a few drops of lavender right on the belly of the pendant. It was my last hope of bringing my dream birth to the hospital with me.

The usual 7-minute drive took us 20 minutes because the roads were pretty bad already. I was checked in and sent back pretty quickly to triage. Once there the on-call midwife (thankfully my favorite from the practice) came to see me. She told me that she could smell lavender down the hallway, “There must be a midwife patient here.” she said. A quick ultrasound confirmed that Bronson was still transverse and two OB’s were sent to try manual version.

I had heard so many frightening stories about how painful manual version could be. In truth, it was no tickle fest, but it was tolerable. After an hour and a half of trying, the OB turned to me and said that she was sorry. the baby wouldn’t turn. The anesthesiologist came to introduce himself and asked when and what I had eaten last. I said I had a huge meal an hour before. I had barely eaten that day but I thought it would buy some time to try and let labor turn the baby. I labor until I was 5 cm dilated but at that point, the nurse could feel the baby’s foot during a vaginal check and my time had run out. My husband was directed to where he should change and prepared to meet me in the OR.

The midwife held my hand and asked me if I was ok. She said I seemed to be taking the news really well but she wanted to be sure. I thought I had come to terms with the fact that my baby would be born by c-section, but as I began to walk down the hallway to where my baby would be born, it hit.

It was really going to happen.

A small part of me always believed that this baby would turn. My husband Charles came to be by my side just before the surgery started. As I was helped onto the OR table and the anesthesiologist began to explain the spinal block procedure, I completely lost all control of my emotions. The midwife held me as tears poured down my cheeks and I sobbed uncontrollably. She held my hand as I was prepped for surgery and diligently reviewed my C-section birth plan with the OB. I have such an amazing amount of love for my midwife from this experience. When I was finally ready to let go and trust, she was right by my side advocating for my every wish. 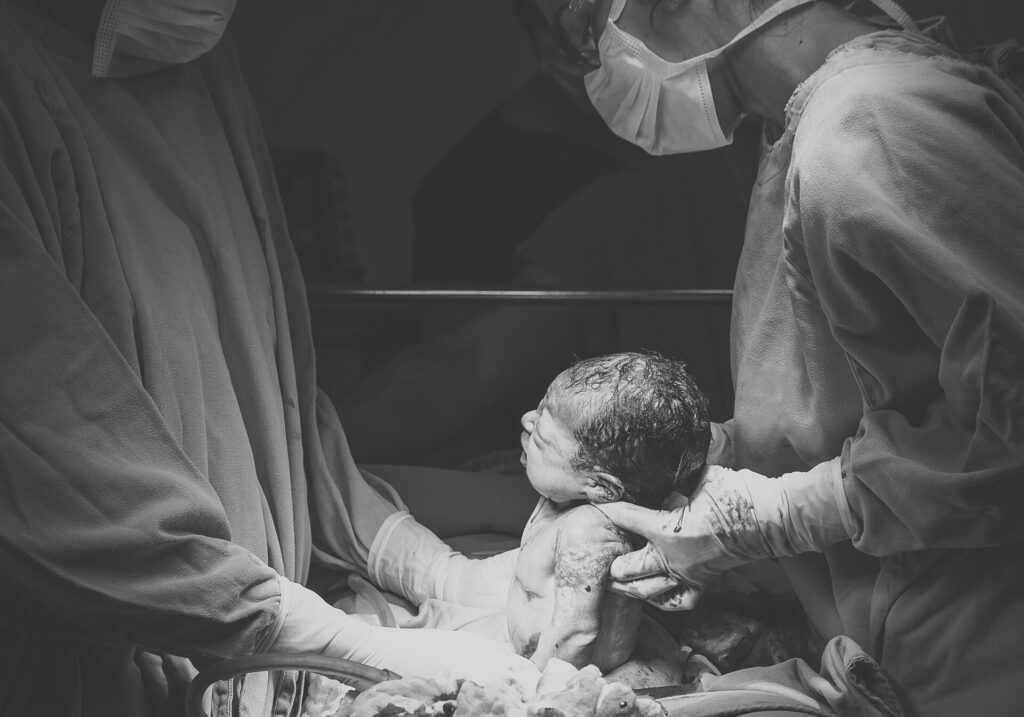 I had earbuds so I could listen to relaxing meditation music, as suggested by the midwife. But after a few minutes, I took the earbuds out. I decided that I wanted to be present while my baby was being born. Seconds later, I heard my baby cry for the first time and I started crying again. I laughed and cried tears of joy. It was then that it hit me. I hadn’t seen him yet but knew I loved him just by hearing his cry. It didn’t matter how my baby came into this world, I loved him just the same.

The act of giving birth creates new life in ways we could never imagine. It’s about creating strong, competent, capable mothers who trust themselves and believe in their inner strength. Sometimes a mother finds that in giving birth to her child, she gives birth to her true self.

I was so afraid that I would give birth at a hospital that wasn’t supportive of my birth plan that I let that fear take over and cause unnecessary stress. In retrospect, although I wanted to avoid a c-section I’m extremely grateful for the positive experience that I had given our circumstances.

My name is Lacey. I am into living simply, naturally, and purposefully. All while raising my family to be mindful of our impact on the planet.


Read more about me here